Every day Noblr software engineer Jessica Chiou works to empower members with an app that can help them drive smarter and safer, but her drive to affect positive change in the world doesn’t end at our office doors.

Late last year Jessica traveled to Gaza, where she volunteered as a technical mentor at a women’s hackathon hosted by Mercy Corps’ Gaza Sky Geeks program. This hackathon was a full-stack coding bootcamp themed against gender-based violence, with teams competing to complete working app prototypes in a set timeframe.

As a technical mentor, Jessica met with hackathon teams to advise on and help them with their projects. She attended at the invitation of a friend who had previously volunteered with GSG, hoping to use her skills to help other women working toward a cause greater than themselves.

While Jessica wasn’t sure what to expect at her first international hackathon, she says it was an amazing experience.

“I met so many young women who were juggling so much — school, freelancing, hobbies — with plans for starting their own companies who were inspirations themselves,” Jessica said.

The unemployment rate in the Gaza Strip is among the highest in the world, with the Palestinian Central Bureau of Statistics reporting 45.1 percent on average, and 57.3 percent for women. With few economic opportunities, many in Gaza learn technical skills in pursuit of remote freelance opportunities.

In addition to unemployment, women are at risk of domestic violence in the area, with the Human Rights Watch reporting that the region has no comprehensive domestic violence law to prevent abuse and protect survivors.

The winning Hackathon team worked to address both of these issues, building an iOS app for women in emergencies. The app sends users’ GPS coordinates to trusted contacts if they face threats like domestic abuse, harassment, or blackmail. Their prize? $1,000, along with further mentorship sessions. 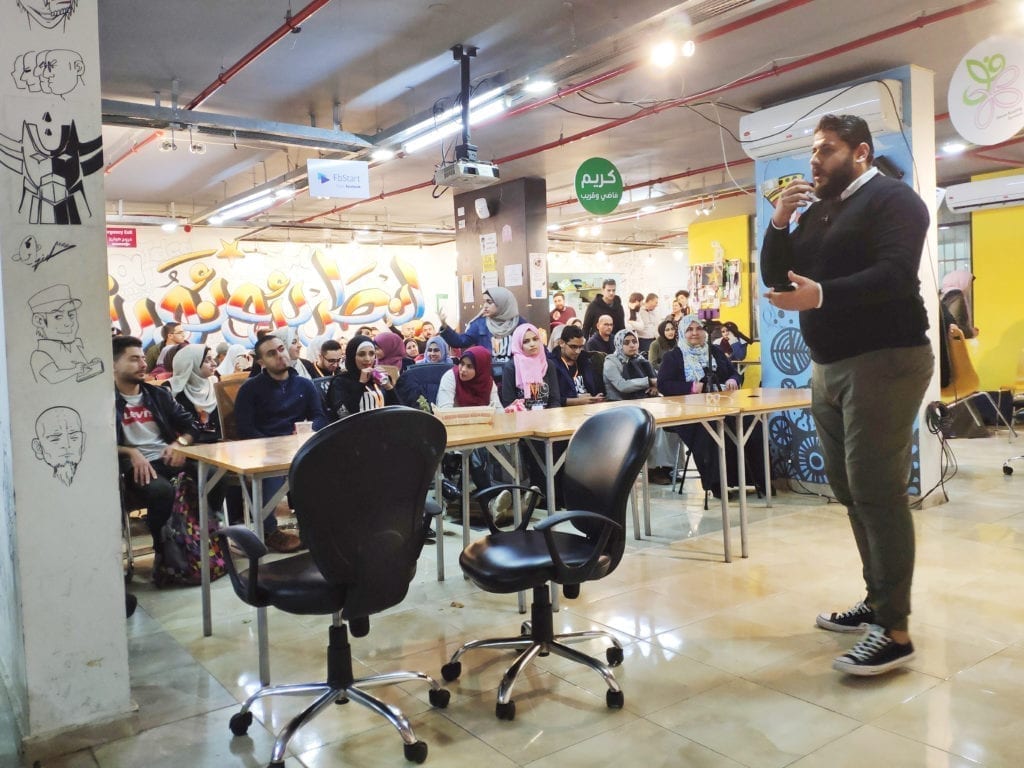 An Expanded Point of View

“My favorite moment was when the first place team found out they won the hackathon. Their eyes lit up, first in disbelief, then joy,” Jessica said, “They had all worked so hard and weren’t afraid to get constant feedback and advice on their app and the direction they were going.”

With its focus on empowering others to succeed, Jessica was grateful for her experience and would recommend similar opportunities to others as they can widen perspectives and give people a different point of view when they approach challenges at work. Additionally, opportunities like hers can increase tolerance and gratitude, and inspire people to do more with what they have.

“There’s a lot we [in The United States] take for granted — the ability to travel freely, safety, electricity, our current job market,” Jessica said. “Despite the political and economic situation in Gaza, the people I met were kind, open, ambitious, and understanding and valued the more intangible things in life, such as family, friendship, and community. It was a reminder for me to see what I take for granted and appreciate what I have around me.”

FAQ
PRESS
CAREERS
ABOUT US
WHY AN APP?
COVERAGES
MEMBERS